Nobody trusts nobody no more

The deputy head of President Yushchenko's secretariat, Ivan Vasyunyk, claims the President is angry because "the latest decisions taken in the VR by deputies took place under duress and were influenced by bribes".

Yushchenko apparently, has appealed to all political forces in parliament to give up such methods, "because this is the road to the devaluation of democracy and the continuation of corruption in parliament."

When Vasyunyk was asked on what basis his assertion was made, he replied, "There is a lot of information. This information should either be checked out, or handed over to court authorities," adding, that the press had written a lot about this. "In the format of various coalitions, the first, and the second, there have been serious unconfirmed rumors circulating."

When a journalist commented that this declaration sounded quite categoric, Vasynuyk replied, "I said this as a warning."

In any decent democracy, such grave accusations would be thoroughly investigated and followed up by law enforcement agencies. We are talking about how newly-elected parliamentary deputies, preparing to run Ukraine for the next 5 years, are being accused by the President of taking bribes to switch from one coalition to another. In Ukraine this warrants just a little warning from the Pres - a tap on the knuckles - nothing out of the ordinary..

PoR are now in the driving seat. And NSNU have two options - each of which will probably cause splits their party. On Monday their party council formally decided to prepare for early re-elections, and yet their leaders are acting as if entry into the anti-crisis coalition is on the cards too.

NSNU's people, in the talks going on at the moment, have always been keen on a 'wider' coalition, and now, after Moroz's betrayal, probably a 'mini' coalition of just PoR and NSNU. Assuming, say, 20 of NSNU's 81 deputies would rather go into opposition, this would give PoR-NSNU coalition a not impregnable 241 votes in a 450-seat VR. PoR would probably be happier with this arrangement too, rather than depending on the Communists as now; but NSNU will demand their man Yekhanurov be PM, and Yanukovych be appointed speaker - a big 'ask', requiring a hell of a climb-down now for PoR, after last week's victory.

The alternative for NSNU is to go into opposition with BYuT against a rather unstable anti-crisis coalition of PoR-Socialists-Communists. PoR could probably 'entice' some defections from NSNU and BYuT- they optimistically claim over 40.

Yuliya T has accused 'Nasha Ukraina' of betrayal, and is urging the President to dissolve parliament and call fresh elections. "NU has sat around a negotiationg table with Communists, Socialist who betrayed us, and with Viktor Yanukovych and his mafia who we pulled out of their offices by their arms during the Orange Revolution." BYuT are running out of partners...
The truth is, just as with the mafias, 'nobody trusts nobody no more'. 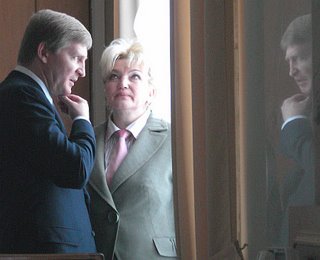 Photo of Raisa Bohatyrova, and Rinat Akhmetov, Ukraine's richest oligarch, and 'the money' behind PoR. [From Ukr.Pravda]
Posted by LEvko at 11:20 PM

I'm sorry, but Yuschenko still seems to be blaming others for his failures. Who wouldn't forgive him for bribing people to fall into line to keep the ORCoalition together so there would be stability and change?

I don't think anything good is going to happen until he realizes that he is the one who has been sleeping at the wheel and decides to be a leader.