Today, Sunday, a mass protest by many thousands of Kyiv Dynamo football club supporters took place in the centre of the capital. Video here

They were protesting against the harsh sentences passed on two supporters' leaders, Dmytro Pavlychenko, and his 19-year old son Serhiy, who were found guilty of murdering a judge in March 2011. 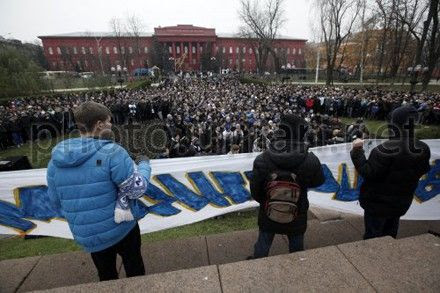 The victim, Judge Serhiy Zubkov, had previously ordered an extension to their apartment to be demolised.

Evidence presented by the prosecutors at the trial was highly suspect and circumstantial. Another court had ruled against the Kyiv prosecutor's office for flagrant procedural violations during the investigation of the murder.

Zubkov was shot twice and stabbed in what looked like a professional 'hit'. He had previously been involved in high-profile Kyiv property construction disputes, so it is possible the Palvychenko's are merely the 'fall guys'.

Sunday's demonstration seemed to pass by peacefully, but the anger and determination of the marchers was unmistakeable. It is fair to conclude, that if people feel strongly about and injustice, they will go out on the street to protest - a worry for the authorities...