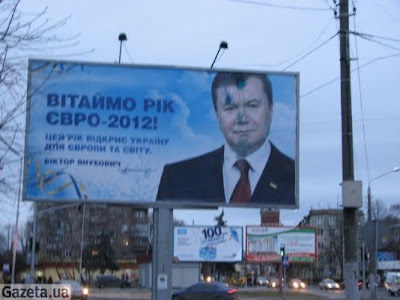 So, following the defacement of poster billboards depicting president Yanukovych in Lviv, written instructions have been handed out to local officials to make sure they are properly maintained, and local officials "react accordingly" in the event of their damage...

Yanukovych was roundly boo'ed and heckled when opening the new Kyiv Olympic stadium several weeks ago, and even 'chickened out' from the opening of the new Lviv stadium. When his face was displayed on big screens, he was jeered and boo'ed.

What sort of reaction does he expect to get when he shows his face during the Euro 2012 competition?
The billboard says: 'This year will open up Ukraine to Europe and the World'....and reveal Yanukovych's popularity nose-diving...he had better get used to it.
Posted by LEvko at 2:19 AM

As you know, they just launched criminal investigations into - billboards.

Vadim Kolesnichenko, from the Party of Rats, has introduced legislation to make it a crime to criticize "the president."

What business does yanusvoloch have using government money to put up billboards of his ugly face promoting Euro 2012?

Euro 2012 needs to be publicized by yanusvoloch's fat ass?

How much government money was wasted by the stupid billboards?

yanusvoloch caused "damage" to Ukraine by spending money on these billboards - the stupid blithering idiot son of a bitch needs to be prosecuted and convicted for "causing great damage to Ukraine."

Better yet, send him to Belars, so Batka can take care of him.