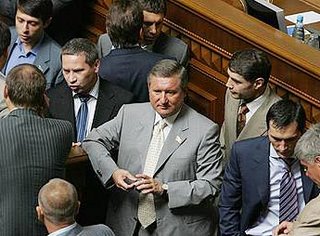 The importance of the late Yevhen Kushnaryov [see photo] in the Ukrainian politics was underscored by the list of VIPs attending his funeral. These included former president Leonid Kuchma, PM Viktor Yanukovych, many cabinet ministers, VR speaker Oleksandr Moroz, former speaker Volodymyr Lytvyn, Rinat Akmetov, Russian embassador Chernomyrdin, Petro Poroshenko and Yevhen Chervonenko from the orange camp, and a host of oblast governors from both Ukraine and Russia. A metro station and a city road is to be named in his honor in Kharkiv. Over 30,000 people filed past his coffin to pay their last respects, and 22 chartered flights filled with mourners landed in Kharkiv on the day of the funeral.

But the incompetent way his killing has been dealt by the country's leadership and media fuels speculation surrounding his death.

There has been several conflicting statements made, but thus far no official detailed account of he was killed. It looks as if a 'final version of events' is still being worked on.

According to one statement, a firearm was accidently discharged inside a Toyota Land Cruiser when the brakes were suddenly applied to avoid a wolf on the road. In another version shots were fired beyond the vehicle 'while Kushnaryov was behind some bushes'. First it was reported that the incident occurred at 2 pm, then 4 pm as dusk was falling. An official stated that the fatal shot was fired from a 'Saiga' rifle [whose use is proscribed for hunting purposes] - then it was a 'Benelli' Argo hunting rifle. And definitely nobody in the hunting party had traces of alcohol in their bodies - completely implausible to most Ukrainians. Even though it was 'out of hunting season' it wasn't poaching because it was on private property.

After this the 'big-boys' from Kyiv waded in. Deputy minister of internal affairs Korienko claimed that the incident was an accident - just something that occurred in the 'excitement [or fervour] of hunting'. [An astonishingly callous remark in my view.] Investigators were treating the incident as a 'homicide caused by undue care'.

PoR VR deputy Tetyana Bakhteyeva - an experienced medical practitioner, expressed suspicion because the bullet had punctured the liver, right kidney, and bowels - an improbable trajectory. VR human rights commissioner Nina Karpachova expressed concern that the truth may be being concealed.

By general concensus the fatal shot was fired by vice-president of the 'Tochprylad' company, industrialist Dmytro Zavalskyi, who, astonishingly, in the past had been a member of the Ukrainian national rifle-shooting team and who had been decorated 'Master of Ukrainian Sport' for his achievements. So, an eagle-eyed crack-shot..

Polish TV reported that there had been a quarrel during the hunt between Kushnaryov and Zavalskyi when they were both under the influence of alcohol, and that Zavalskyi had not wished to receive Kushnaryov at his dacha nearby. [This is beginning to sound like something from Agatha Christie..]

The deputy minister of health Valeriy Ivasiuk claimed that Kushnaryov's life could have been saved had there been sufficient blood reserves in the the town of Izyum, where Kushnarov was treated for his wounds, and that his death was caused by the "the mediocrity of our medical services" - another extraordinarily insensitive comment which was immediately challenged by local doctors and authorities who unanimously declared Kushnaryov's injuries were such as not to be "consistent with life".

The manner in which Kushnaryov's death has been handled reveals much about the disregard for human life and lack of decency and respect for fellow human beings in Ukraine by those who were supposed to be his friends and political associates. It is hardly surprising that theories about conspiracy and foul play spring up.

As for the VR opposition, they seem to be indifferent whether Kushnaryov's death is properly investigated or not. They should be the ones asking awkward questions and checking that the government scrupulously investigate Kuchnirov's death..

Six months ago the Ukrainian minister of foreign affairs announced Russian legislator Konstyantin Zatulin [and Vladimir Zhyrynovsky] persona non grata for stirring up trouble in Crimea. Yesterday he attended Kushnaryov's funeral and is seen here flanked by Yanukovych and Moroz. 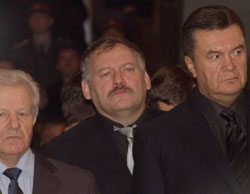 During the funeral procession shouts from the crowd to Yanukovych were heard: "Viktor Feyodorovych - find the killer!" - causing Yanukovych to wince..
Posted by LEvko at 9:35 PM