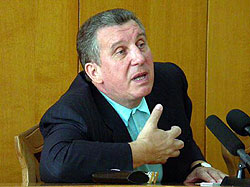 Yesterday it was revealed that the U.S. Department of Justice has directed a number of queries to Ukrainian authorities about the origin of a $2 million bail, paid to release the former governor of Sumy region Vladimir Shcherban [see photo] from custody.

According to an article in 'Kommersant-Ukraina' the money was from an account linked to Akhmetov's System Capital Management. Unsurprisingly, SCM deny any involvement.

On 25 April 2005 a criminal case against Shcherban was opened after he was suspected of the crimes of extortion, exceeding his official authority, and other crimes. An international search warrant was issued in the following month by the Ministry of Internal Affairs, and in October 2005 Shcherban was detained in Miami, Florida and held in custody for violation of immigration legislation.

According to the information from Interpol, Ukraine requested his extradition, and the U.S. Government began deportation proceedings. The former governor of Sumy region then turned to a local law court requesting political refugee status.

At one of the judicial sessions last January Vladimir Shcherban was freed from custody after $2 million bail was paid by his attorney, Mr. George Balan.

The Department Immigration and Customs of theUS Department of Justice has conducted its own investigation into the financial activities of Shcherban. In the course of these the American department obtained bank documents which suggest that directly before the release of Mr. Shcherban, the Balan Company International may have received $2 million from System Capital Management, via the Cyprus Popular Bank Ltd.

According to a source, after obtaining this information, the Department of Immigration and Customs Service requested that Ukrainian law enforcement agencies establish that the sum was legally transferred. From July of this year several such requests have been made, but so far - no reply.

Although SCM spokesmen have denied putting up Shcherban's bail, the attorney of Donetsk region head Boris Kolesnikov, Anatoliy Korzheva, has confirmed that SCM were ready to put up this sum (10 million hryven) to release Scherban from custody.

Why should Ukraine's biggest industrial and business corporation, which is closely linked via its owner to the ruling party, be putting up bail in another country for someone who, while in public office, may have committed serious crimes?