The summit of the Commonwealth of Independent States (CIS), which took place in Minsk on November 28th was one of the best-attended of recent years. 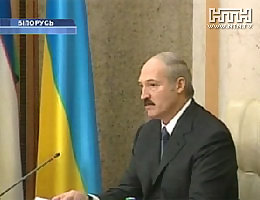 The host for this event was, of course, President Alexander Lukashenko of Belarus with his exemplary comb-over hair cut - the give-away is the proximity of the parting-line to the ear, and the depth to which it extends around the back of the head. [see photo] I wonder if some kind of adhesive or fixative is used in its elaborate arrangement, in order to avoid possible embarrassment caused by unexpected gusts of wind etc.

I recall a highly placed official of the Russian State Organic Chemistry Institute attributing, in the mass media, Yushchenko's poisoning to 'out-of-date' eau-de-cologne, after western scientists had declared the probable cause was a dioxin cocktail.
Posted by LEvko at 12:04 AM