I love this story on how humour and pussies can outwit the greatest efforts of a mighty political machine...and not only in Russia.. 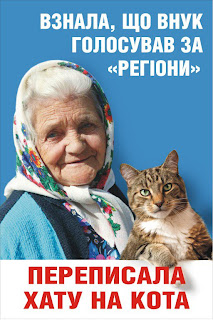 A friend sent me this with more details:

A poster with an elderly lady holding a cat has caused controversy in Ukraine as preparations get under way for parliamentary elections due in October. The poster, put up in the east Ukraine city of Dniprodzerzhynsk, carried a humorous call not to vote for the ruling party.  Next to the picture of the lady with the cat, a caption said: "I have learned that my grandson voted for the Party of Regions. So I have rewritten my will so that my cat inherits the house." Within a few days, the top part of the caption that mentioned the party had been removed, leaving the granny merely declaring that her house goes to the cat.

Regional Governor Oleksandr Vilkul - also the local Party of Regions leader - had called the billboard's owners, demanding that "this outrage be dealt with", said a local news website.  Dneprodzerzhynsk Online said that there was nothing illegal or offensive about the poster.

"It is a shame, comrades, a shame," it said.   "Lives in danger"  A day later, the same website reported that the man behind the poster was Maksym Holosnoy, an opposition-minded head of a local village council. He told the website that the head of the billboard advertising company had been admitted to intensive care "following a telephone conversation with a high-ranking official".  Holosnoy also told Dneprodzerzhynsk Online that he was wanted by the police, but it was not clear why.  "It has been more than a month now and my lawyer cannot make it any clearer: we are not allowed to see any documents and we can't appeal," he said. "The example of our billboard is so telling. The Party of Regions has hundreds of billboards in our city alone, which it uses to proclaim that stability and prosperity have arrived. We only had one, which told the truth, albeit in a humorous way. Because of it, several people have suffered and their lives have been put in danger," Holosnoy said.

Fatherland, a major opposition alliance in Ukraine, described police interest in Holosnoy as persecution and offered legal assistance to those who created and put up the poster. "The government's reaction to humour once again points to the dictatorial leanings of [President] Yanukovych and his entourage. Being unable to laugh at yourself shows that the authorities are immature, and that the Party of Regions leaders are beset by complexes and phobias," the alliance said on its Facebook page. However, Dnipropetrovsk police denied Holosnoy was being prosecuted for political reasons. He was wanted for embezzling state property when he was a local official, the police said.  Meanwhile, in a YouTube video, Holosnoy said he was "being hounded" by the police because he is running as a candidate in the parliamentary elections.