Pressure getting to Putin?

During World War 2 one of my forebears was forcibly taken from Ukraine to Germany  to work in coal mines.

He would recount that in conversations with German miners during work breaks in the quieter moments underground many would confess that in their hearts they realised there could only be one outcome to the war. "There are just too many against us," they would sigh...but as loyal patriots they continued to support their "crazy herring" leader. [As Hitler was sometimes called in the Rhineland].

I would guess such thoughts pass through the minds of some Russians now. [Some are returning to analogies with Weimar Germany.]

The scrapping of 'South Stream' by Putin a couple of days ago was a bitter pill to swallow...No self-respecting mafia capo ever, ever, makes a concession, especially a big, expensive public one like this was. Unquestionably a victory for Ukraine.

[BTW, how long will it take European Utility companies and NaftoHaz Ukrainy to form an international consortium to own, upgrade and run the Ukrainian gas transport system complete with its huge underground reservoirs, and enable Europeans, at long last, to purchase Russian gas at one transparent price at the Russia/Ukaine border? This is a big anti-corruption test..]

A couple of days ago a so-called ceasefire was agreed between warring factions in Donbas. "The Head of the Russian representation in the south-east of Ukraine, Lieutenant-General Aleksandr Lentsov" sat alongside his Ukrainian counterpart to announce the [ceasefire} agreement".... which so far shows little sign of sticking. Today Lentsov confirmed that a ceasefire in Donbas can now be expected. Surely this is an overt admission that Russia is behind the separatists, and is trying to pull their strings.

The separatists, LNR and DNR comprise a rag-bag of undisciplined war lords, that I suspect, even Putin cannot fully control. By sending Lentsov he is signalling to the separatists..I'm in charge now. It just maybe dawning on Putin: 'If you are in a hole, then at least first stop digging'.

Meanwhile there are millions of citizens in terrible condition in Eastern Ukraine - who is going to look after their welfare? Who is going to help them survive the cruel winter? Who will help rebuild the destroyed infrastructure? A virtually bankrupt, embattled Ukraine? The temptation to say: "No, we are not taking it back... not in that condition," is gaining ground.

p.s.
This cartoon showing Obama and Merkel on the bow of the Titanic about to hit the Kremlin iceberg appeared in a Russian newspaper recently: 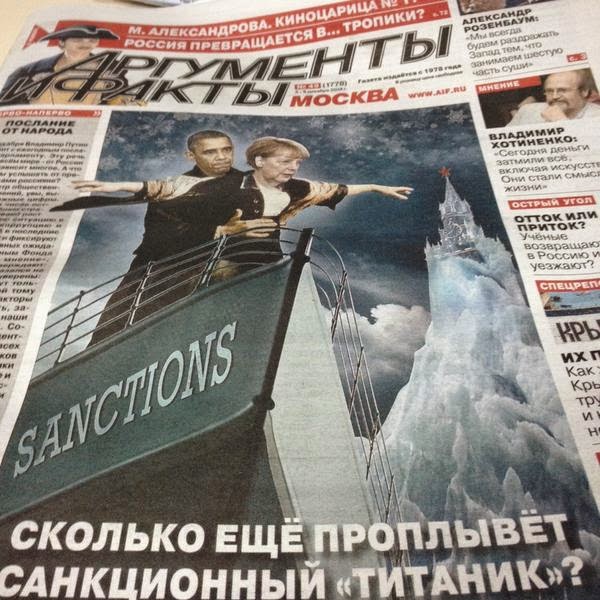 Russian readers will be well aware it is their currency and their economy that is sinking..and  fast...Euros and dollars are just fine...the rich are fighting over one another to dump roubles...grab the capital flight life-rafts just as quick as they can...They will not miss the irony...poorer passengers on the lower decks of the Titanic were the first to perish...
Posted by LEvko at 10:18 PM