The seating arrangements in the newly-elected Parliamentary deputies have been agreed, and the first sitting of the new Verkhovna Rada is to take place on Thursday.

Yesterday BYuT, NSNU, and the Socialists had decided on one possible seating arrangement, but this morning the Socialists wanted to change it, for reasons that provide some insight into the workings of the VR.

The Socialists were to be seated in a narrow wedge of seats in twos and threes, behind one another, but this would have made it more difficult for one of their deputies [a so-called 'piano-player] to vote, by pressing a panel button in front of each seat, on behalf of other, absent deputies, in the short period of time allotted for voting. This kind of officially impermissible behaviour has frequenly taken place in the past.

PR will dominate the left hand side of the VR, giving them easy access, via the nearest exit to an empty lobby, where they can quickly plot 'off-the-cuff' strategy without journalists, who normally linger in the opposite lobby, being present.

But the best seats, to the right of the speaker, are retained by NSNU - this is an area most favoured by TV and mass media cameras. The government ministers' lobby is nearby, and so this location is a parliamentary action 'hot-spot'. 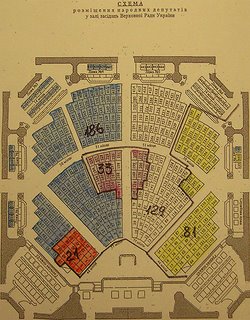 From Ukrainska Pravda]
Posted by LEvko at 10:56 PM