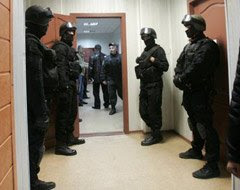 Ukrainian Security Service [SBU] personnel in the Administrative appeal court in Kyiv today.
Earlier a group of BYuT parliamentary deputies had blocked the hearing of a complaint from the president's secretariat on the earlier decision of the Kyiv District Administrative Court to annul the president's ukaz calling for early parliamentary elections.
BYuT has accused the president's secretariat of applying undue pressure on the court to force them to restore the President's ukaz, and claim their deputies were in court merely to protect court staff "from pressure applied onto the court body". According to one of deputies, the court has no right to consider the secratariat's appeal until Thursday of next week in any case.
Other sources claim it is the SBU are that are affording 'protection' to three judges of the Administrative appeal court
Deputy head of the Central Electoral Commission Andriy Mahera has said in an interview that his commision has suspended any preparatory work arranging the proposed December 7th elections.
p.s. In a TV debate on 'Shuster Live' PM Yulia Tymoshenko claimed on several occasions that the December 7th parliamentary elections ordered by the president will not take place.
See a lively video of her full performance together with that of Viktor Yanukovych [and transcript] here
Posted by LEvko at 2:12 AM

I'm thinking about having a discussion session "Blogging about Eastern Europe in English" at Blogcamp. Would you like to participate in such (panel) discussion?

Please let me know at mail@demchenko.info

I have sent you an e-mail, but it didn't work.

April 2007 the Parliamentary Assembly of the Council of Europe (PACE) passed a resolution in consideration of a report titled Functioning of democratic institutions in Ukraine. (Items 13 and 14) stated:

“The Assembly deplores the fact that the judicial system of Ukraine has been systematically misused by other branches of power and that top officials do not execute the courts’ decisions, which is a sign of erosion of this crucial democratic institution. An independent and impartial judiciary is a precondition for the existence of a democratic society governed by the rule of law."

"Several local courts have made decisions to suspend the Presidential Decree only to then withdraw them, allegedly under pressure from the presidential secretariat." (item 67)

In emphasis the report (item 68) stated

"This is a worrying tendency of legal nihilism that should not be tolerated. It is as clear as day that in a state governed by the rule of law judicial mistakes should be corrected through appeal procedures and not through threats or disciplinary sanctions ”

The rock upon which a democratic government rests is its constitution--the formal statement of its fundamental obligations, limitations, procedures, and institutions. The constitution of the country is the supreme law of the land, and all citizens, prime ministers to peasants alike, are subject to its provisions.

"Judges may be either appointed or elected to office, and hold office for specified terms or for life. However they are chosen, it is vital that they be independent of the nation's political authority to ensure their impartiality. Judges cannot be removed for trivial or merely political reasons, but only for serious crimes or misdeeds--and then only through a formal procedure, such as impeachment (the bringing of charges) and trial in the legislature."

Ukraine's Constitution has a provision and process for the Impeachment of Judges.

Yushchenko does not have the authority to unilaterally dismiss Judges at will. Last year the Court found that Yushchenko's interference and dismissal of Constitutional Court Judges to be illegal. This is a serious offence and one that is ground for the President's impeachment.

The Shuster video is quite an amazing video. And it fully illustrates the Ukrainian tendency - even when Ukrainian agree, they argue and fight to the utmost.

2) They both agree that there needs to be a law regarding the duties, rights and obligations of the opposition.

Yulia invited Yanuk to get together and work toward passing such laws, with the government pledging to work out in the open, and with the opposition having the right to monitor, very closely, the work of the government, with consequences for any corruption in office.

Well, Yanuk said he would do so, sort of.

But then they could not resist cat-fighting with each other about who should be in the opposition. Funny!

I wonder if they will actually get together and do it. Yulia is absolutely right - there needs to be a mechanism for a strong opposition, and she seems not to be afraid of scrutiny of the government.


3) They both agreed that there is no trust in the government, although Yanuk stated it more indirectly.

Then they started hurling accusations about corruption, about the effectiveness of government, or rather lack therof, about miners' wages, and about inflation.

I think Yulia clearly won all of those rounds, including her work to stop corruption, and increase government revenues due to stopping corruption.

They got a lot out on the table about corruption, and the lack of effectiveness of government, although Yanuk claimed that his government was indeed "effective," but he didn't quite get into specifics.

5) They seemed to repeat a lot of things, including "government working for the people under one flag."

The interview could and should have lasted about 2 minutes, when they both agreed that they should work on a law regarding the opposition, and that government should work for the people under one flag.

The first is a concrete point, the second is nice political phrasing that one finds everywhere.

Ukraine still has some serious work ahead of it on the way to establishing a full-fledged government.

I hope that Tymo's bloc and Yanuk's bloc can at least take that first step regarding the law on the opposition.