On Tuesday "A dramatic court hearing kicked off in Kyiv that could become pivotal for Ukraine's chances to sign an Association Agreement with the European Union this year."

Former Minister of the Interior, Yuriy Lutsenko, was appearing before the Higher Specialized Appeal Court for Civil and Criminal Cases.

The court room selected was about 15 sq.m. in size - Lutsenko was placed inside a soundproof  'glass aquarium' with a bench against the back wall for him to sit on.

The only way he could communicate with his defence council or others in the courtroom was through a waist-high opening at the side of the glass  box - forcing him to bend down deeply whenever he wished to talk... 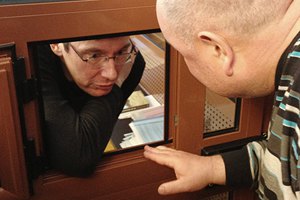 Most of the seats in the tiny courtroom were occupied by uniformed officers. Journalists had to sit in an adjacent room and watch proceedings on a plasma screen. There was no room for political colleagues - only his closest family members could attend.

In courtrooms in the European Union, and in most civilised countries, even murderers are not humiliated in this way.

In these countries Lutsenko's alleged crimes would perhaps not even warrant a custodial sentence. The European Court of Human Rights have already declared he had been unfairly held under arrest before his trial. He has served well over half of a four-year sentence and recently underwent a surgical  operation. More surgery may be required in the future.

Lutsenko's disgraceful treatment provides more evidence of the vindictiveness and vengefulness of the Yanukovych regime...and how little they know of the European values to which they aspire..

I shudder to think what European politicans make of this...