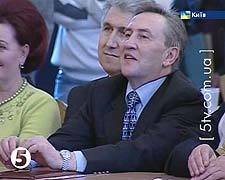 The newly-elected oddball mayor of Kyiv Leonid Chervonetsky was sworn into office Friday, apparently after a delay of two hours during which time he managed to scrape together a quorum of 61 registered city council deputies out of a total of 120. [Scott has previously posted info on this guy.]

Some deputies claim they were not aware that the ceremony was taking place, while others claim only 55 deputies were present. It all seems to have been rather a farce.

On Saturday a coalition comprising a total of 62 deputies called 'A Just Kyiv' led by Vitaliy Klychko, was formed by BYuT, Pora-PRP, and 'Hromadskyi aktyv Kyyeva' [HAK] factions.

Today Yuliya Tymoshenko condemned the support given to Chervonetsky's deputies by the NU and PR blocs. "I consider that such a coalition will practically make Kyiv a new business bridgehead for certain groupings, and practically ruin the aim of making Kyiv a civilized capital where politicians act fairly and honestly, in particular in the City council," she underlined.

She also promised that BYuT will not form any coalitions in any regional, city or oblast council with PR.

The Kyiv city council comprises 8 different political factions with 15 deputies from NU bloc, 9 from PR, and 21 from Chervonetsky's bloc. BYuT is the largest faction with 41 deputies.

I wonder if the NU 'nachal'stvo' will comment on this skulduggery..
Posted by LEvko at 11:02 PM

It also sounds like the bribe prices have definitely risen in this past election and the man did some decent stuff to get into power.

This is what we called "clean graft" in the US in the beginning of the 20th ctry. We'll see how he compares with the previous mayor.