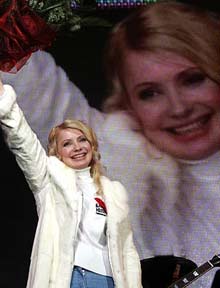 Nice photo of Yulia at a St Valentine's Day Bash...
Meanwhile..
At a meeting in Nizhyn yesterday Yuliya Tymoshenko said: "If Yanukovych wins, his dreadful past will become our terrible future.. will will have one big clan, [in which] one department will be called Verkhovna Rada, another the Cabinet of Ministers, and Ukraine will be their limited company." She went on: "Yanukovych's list contains not only persons who have been charged with crimes, but who are on wanted lists, [on] matters related to murder...names of those who have a criminal past, who were tried for homicide, for stealing hats, for rape.."