Well it looks like the Oranges are back in business - but the partners still don't trust one another. Socialist leader Oleksandr Moroz says that if the deal is not 'closed' Thursday, all bets are off and his party becomes a free agent again. NSNU's Bezsmertniy wanted to delay until Friday..

And Petro Poroshenko, Tymoshenko's biggest enemy in NSNU, is to be nominated for the VR speaker's job. She accused him may times of sabotaging her work when she was PM - they loathe one another.

Now Anatoliy Kinakh, a former PM whose Party of Industrialists and Entrepreneurs of Ukraine forms a portion of NSNU, also wants the speaker's job. Although he has been critical of Tymoshenko in the past, his appointment in the VR would be more acceptable to Tymoshenko. When Tymoshenko was returning to her seat after addressing the VR today, Kinakh gave her the 'thumbs-up' as if to say, 'Good speech, Yulka..' 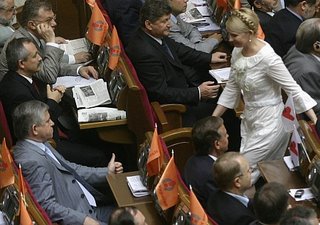 There is a sober realization by all partners that it's going to be really tough to hold things together, even for a few months. There wasn't really much 'fizz' amongst the orange deputies in the VR today despite the ostensibly successful agreement between its leaders.
Posted by LEvko at 1:16 AM

I still have hope that if Yuschenko resolves to get his hands dirty that the coalition will hold and there will be both stability and reform.

We were told in our meeting today with Ukrtransnafta that the deal was done. We wished them "long life for the government" and everybody laughed.

Meanwhile the board of the company was having an extraordinary general meeting just in case.

So Cool!! So Cool!! "Kinakh gave her the 'thumbs-up' as if to say, 'Good speech, Yulka.." Ty is so well loved here in Ukraine. My God help Ty succeed.