A feature of contemporary Ukrainian politics is the constant shifting in alliances between Yushchenko-Yanukovych-Tymoshenko-Moroz that reminds me the old Microsoft screen-saver, (called 'Mystify')where sides of a polygon constantly get bigger or smaller and rotate [the main protagonists being the apexes of the polygon].

A couple of weeks ago a BYuT-NU opposition agreement was signed by Tymoshenko and head of the NU council and chief of the Presidential secretariat Viktor Baloha.

Today a meeting took place between Yushchenko-Yanukovych-Moroz. This was followed by a session of the powerful National Security and Defence Council [see photo of the two Viktors, Azarov and NSDC secretary Hayduk]. The planned agenda on global warning 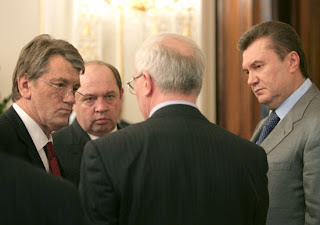 and other matters was altered, and discussions took place on stabilization of the turbulent relations between the President, the parliament and the government.

Tymoshenko immediately reacted saying, "It seems to me that while I left Kyiv for [just] half a day this criminal government has somehow entangled Viktor Andriyevych [Yush] in its plans, and has again attempted to drag him down a road with no end."

When asked about the further fate of the union between BYuT-NU and the president, she replied, "Our strategic plans on the defence of Ukraine, the defence of the people, are unchanged. And in whatever format we will do this, in coalition with opposition forces, or independently - we will do this. That's the main thing."

But it does look like Yush and Yanuk are drawing a bit closer together. A piece in Glavred entitled 'Global reconciliation instead of global warming', speculates that perhaps the Yanuk government is worried about the possibility of early parliamentary elections [which are being not too convincingly threatened by the opposition.]

Maybe the KabMin realizes that if the President bows to the wishes of the opposition and continues to refuse to sign off bills accepted by simple majority of votes, then the activity of government will be hampered, so it is better to negotiate with the Head of State after all.

Or maybe the President has realized that he cannot be Head of The State and leader of opposition simultaneously.

Now Yanukovych and the anti-crisis coalition may be ready to accept Yushchenko's choice for Foreign minister, the pro-western Volodymyr Ohryzko, something Yush hinted at after his meeting with Moroz and Yanuk., indicating new-found flexibility.
Posted by LEvko at 12:55 AM

Thanks for the photo. It is obvious that Azarov is calling the shots and whatever Yushchenko is hearing, he is not liking it. But is swallowing it.