PM Viktor Yanukovych has addressed the nation on the first anniversary of last year's VR elections. "I would be insincere if I did not admit that everything that we have managed to achieve would have been impossible had we not drawn correct conclusions from the events of 2004, 2005 and 2006, and if we had not applied huge efforts in order to acquire and apply [this] new political experience." said Yanukovych.
He even felt confident enough to invite journalists to his Kyiv house, where he publicly admitted for the first time that he had 'been behind bars'. Speaking of his wife he said, "After we got to know one another in '69, in 1970 I wound up in prison. [But] she waited for me. I was released on '72 and immediately after this, after two months we married. She waited for me."
He also offered his perform his Roy Orbison [or was it Elvis?] impersonation [see photo], but lamely chickened out with the exuse that his guitar was out of tune. 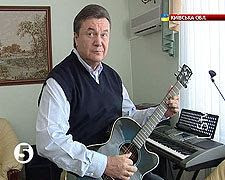 Its looking good for Yanukovych and PoR - the president is faltering, opposition VR deputies are drifting over to the National Unity coalition, and there's even talk of a 'constitutional majority' of over 300 deputies by the summer. So why the heavy-handed hounding of Yuriy Lutsenko and his 'People's self-defence' movement which is not even registered as a political party? This, perhaps reveals more than staged appearances and speeches written spin doctors, PoR's true colours - and their weakness. Maybe they have not drawn correct conclusions from the events of 2004, 2005 and 2006, after all.
Lutsenko's public meeting in Kharkiv and the determined attempts by the city authorities and mayor Mikhailo Dobkin to disrupt it using foul means including the use of paid thugs, are described in 'Bez Tsenzury'. Dobkin was in London last week with Yuriy Boyko at an investment forum.
"You ain't nothin but a hound dog,
Cryin all the time..." [Elvis Presley]
Posted by LEvko at 12:03 AM