The main political players held their party conferences last weekend. They were all very stage-managed, glitzy affairs, clearly revealing serious involvement of Western spin-doctors. [Good reports in Ukr. Pravda]
How well this kind of thing goes down with the 'man in the street' is questioned in an article in 'Novosti Donestka'.

"Last weekend the congress of the Party of Regions, which ended with a celebratory concert transmitted on Ukrainian TV, shows that the American spin-doctors working with Victor Yanukovych, have finally decided to convert the PoR leader into a pitiful copy of the leaders of the orange Maydan, says Russian polittekhnolog Aleksey Ivanov.

"Yanukovych is being transformed into a sexually attractive, dashing politician. Dances with singers, a mischievous smile, the fireworks which lit up as he moved onto the stage, transparent prompt boards - all these have the imprint of the American school of [veteran US spin doctor] Paul Manafort... But the Ukrainian Yanukovych looks rather absurd, as if in someone else's suit," considers Ivanov.

He considers that the creators of the new Yanukovych are breaking an important principle: the natural basic, organic qualities of a political leader should never be radically changed.

"It is better to replace a leader. The qualities inherent in a leader should be portrayed positively. If Yanukovich is physically imposing and forthright, then this should be portrayed as conservatism, adherence to traditions and trustworthiness - as an illustration of stability. He should stick to being as he is.

"In contrast to Yanukovych, Yushchenko and Tymoshenko remain true to their image, working only on their development. Yushchenko, with his craggy face continues to lead the country Westward, remaining consistent in his policy. And pugnacious Yulia continues to develop her brilliant public qualities. Her congress was also conducted according to the canons of western political norms. But its scale suits her," emphasizes Ivanov.

"PoR decided to advance on the "orange" electorate months ago, using similar orange technology, but it all turned into a wretched parody. Participants of their Maydan simply littered up Kiev and turned most Kyivites against them," says Ivanov.

The Regionaly probably think with the logic of military staff officers: the east is ours, now we have to advance westward, through central Ukraine, moving the front line forward. And, correspondingly, they have prepared for the center and the east another version of Yanukovych - a 'lighter' version, without a clear position on language and NATO, emphasizing only the economy and social development. But in actual fact there is no front whatever, and there is no its territory. There is only one media expanse. And new Yanukovych, while maybe acquiring something in central Ukraine, could lose more in the east." 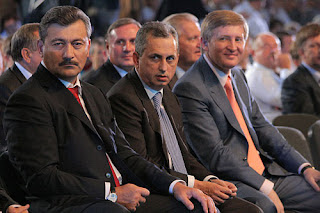 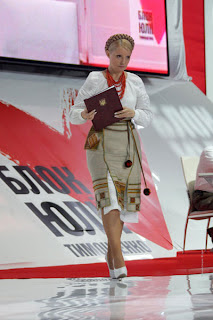 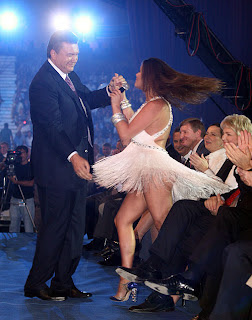 Akhmetov with close associates Kolesnikov and Dzharty..his choice of tie colour is interesting..

As for Yanukovych - is this a new take on Marilyn Monroe/JFK, 'Happy Birthday, Mr President'?