In a recent press conference, Vladimir Putin replied in the following manner to a question by a German press agency chief who asked him about deteriorating relations in the sphere of energy supplies between the Russian Federation and its partners, and also about Russia's refusing western countries access to its gas deposits: 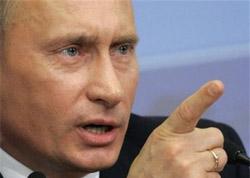 Not very statesmanlike comments considering last March's Parliamentary elections were considered by everyone as being the fairest in Ukraine's history -totally free of foreign interference.

From 1985 to 1990 the KGB stationed Putin in Dresden, East Germany, in what he himself acknowledges was a minor position.

ps Not much reaction to events in Feodosiya by parties forming the 'democratic coalition, so far. NATO must be a dirty word in Ukraine.
Posted by LEvko at 10:56 PM

What's it going to take to get the West to stand up against Putin?

How is Eastern Ukraine/Yanukovich responding to this? See, if you had put us in power, Putin would keep gas prices lower?

Can we live on lower gas prices alone?

So when somebody calls a spade a spade in simple words rather than diplospeak, it is not statesmanlike?
Get your "friends" to pay for your country. Ukraine wants to join NATO, then let the NATO countries subsidize its economy!

Russia is very happy, as a country blessed with certain natural resources, to sell those at market prices to customers. It does not wish to give up ownership of these deposits or of it's pipeline network - it's simply prepared to sell its gas to paying customers. Sounds fair to me - why is it not entitled to make such decisions over it's own resources? And yes, energy is an increasingly scarce commodity, will no doubt increase further. Where are the market principles here!?

Equally, Russia chooses to subsidise its domestic consumers of gas. This is surely a legitimate decision of a sovereign state? Less obvious is how long it can be expected to subsidise customers in foreign states formerly of the USSR. Fair may be a long and known transition period to provide a transparent basis for planning, and some cushion for adjustment. This transparency is not obviously part of the RosUkrEnergo deal however - a deal where it would appear Ukrainian national interests were not at all well served by its own politicians.

What I don't understand is why someone doesn't simply respond by saying ... "You signed an agreement in 2004 with a set price. We're not asking you to subsidize anything. We're asking you to live up to a contract."

The question as usual for Russia is -- will it live up to its agreements. Consistently, it doesnn't (look at the agreements to meet the CFE treaty, remove arms from transnistria, etc).