PR leader Viktor Yanukovych, in an address 'to the Ukrainian nation' today declared, .."the so-called orange coalition is striving to seize power by any means, ignoring state laws and will of the people...we will block the work of the Ukrainian parliament until the oranges agree to live and act according to the law and state constitution. I know you will stand shoulder to shoulder with us, [and] when necessary will support our deeds with actions of national insubordination."

'Pora' are taking this 'preparation for mass provocations' seriously. PR's desire to support the rule of law is touching, but out of character, Yanukovych himself spend 3 1/2 years in prison for violent crimes, in his youth. 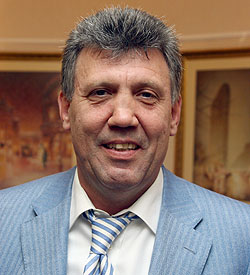 PR include many 'shady customers' amongst their deputies, including Serhiy Kivalov, who was Central Electoral Commission chief during the 2004 Presidential elections. They had some trouble adding up the numbers at that time. [Just an excuse to post this photo.]

In the March 2006 elections PR received 32.12% of the vote, even though many of its leaders and spokesmen now glibly speak of representing 'half of Ukraine'.

In fact many of the demands PR are making do not have sound validity, but are based on ambiguities in the VR rules.

I suspect the orange coalition members are not too bothered by PR's parliamentary sit-in because it deflects attention from splits and disagreements within their own ranks. For a change, it is PR that are stalling work in the VR, and it now gives the oranges time to try and get their own 'ducks in a row' again.


Some reports claim that there could be up to several dozen orange deputies whose vote, [for whatever reason..bribes, blackmail..] is not reliable - they could well vote against their respective parties official line, especially in any secret voting. If this is the case, then it is very bad news indeed for the oranges, who at best can only muster a majority of 17 in the VR after the March elections. 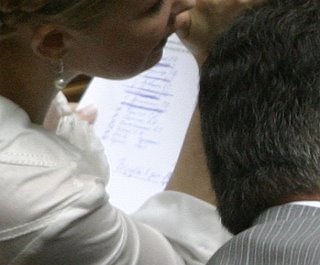 But if PR's campaign of disruption produces some kind of 'grand coalition', I guess everyone [including Tymoshenko as in this photograph from 'Ukr Pravda'] will be counting names on lists, deciding who is dependable and who is not, and wondering who can be persuaded to defect.
Posted by LEvko at 10:37 PM