Off with his head*

Tomorrow [Wednesday] in the VR, BYuT will demand the resignation of chairman of the National Bank of Ukraine, Volodymyr Stelmakh, according to an article in 'Korrespondent'.

A parliamentary commission investigating allegations of corrupt activities at the NBU, which may involve even president Yushchenko and his secretariat, met yesterday.

"According to the preliminary conclusions of the commission, and on the basis of these conclusions, the information which the prime minister of Ukraine revealed live on TV, has been completely confirmed. [See previous blog ]. These conclusions will be declared at tomorrow's parliamentary session, and, most likely, will lead to a change of the entire leadership of the National Bank of Ukraine," said BYuT deputy Valery Pysarenko.

He also has added that BYuT has not yet 'pencilled in' any possible nominee for the post of NBU chair.

The parliamentary commission report is not yet written into tomorrow's parliamentary agenda, and has to be proposed and voted on tomorrow.

Party of Regions trouble-maker deputy Nestor Shufrich today declared that Stelmakh's report in parliament, could most likely end with demands that the President dismisses Stelmakh.

"If the President does not do it, then obviously the next step of the coalition would be to begin procedures to impeach the President for providing cover for, and being an accomplice to, currency speculation. If BYuT initiates this, I do not exclude Party of Regions supporting this initiative," emphasised Shufrich.

The VR set up a temporary investigative commission to look into the NBU's activies on 18th December. On December 20th the prime minister sensationally claimed that as a result of illegal operations carried out via the Nadra bank, the organizers, including President Yushchenko, NBU bank chairman Stelmakh and the head of the President's secretariat Viktor Baloga, planned to rake off 4.55Bn hrvnya.

Your blogger notes that while not providing concrete evidence of illegal activities by the NBU, PM Tymoshenko did give details, of disproportionately large suspicious transfers of state funds to Firtash's Nadra bank. E.g. the state 'Ukreksimbank' received about 7 times less that Nadra. If Tymoshenko's allegations were baloney, they could be easily disproved. Nevertheless, there is a slight whiff of kangaroo court hanging over Stelmakh.

The big question is, will PoR support BYuT and vote to 'decapitate' the NBU chairman? And if this happens, will the president suffer the same fate?

p.s. 'Segodnya' reports that PoR and BYuT may be working together for combined VR and parliamentary elections in the Spring. 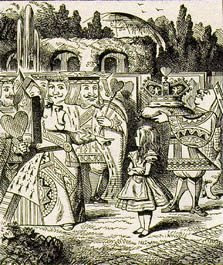 *In Lewis Carroll's much-loved children's story "Alice's Adventures in Wonderland", (published 1865), The Queen of Hearts goes around constantly shrieking this phase, and not much else.
Posted by LEvko at 1:11 AM

How can Tym's allegations easily be disproved, given that the Central Bank doesn't want to reveal which banks were given which funds? And how can her claim that 4.55 billion was made, if it isn't true, be disproved? (and everyone knows that suing in Ukraine doesn't prove anything to anyone)

Niot to foget the classic line "All those 20 feet tall must lkeave the court decreed the king looking at Alice who was the only one that tall.

The concerns expressed by Yulia Tymoshenko reflect warnings given by other Ukrainian Politicians.

Taras Chornovil earlier this year exposed a plot by the Office of the President along similar lines.

Tymoshenko noted that the Ukrainian Constitution envisages cancellation of all elections if the emergency rule is introduced in the country.

Prime Minister Yulia Tymoshenko said she wants to stop the process and prevent Viktor Yushchenko from installing a dictatorship in what would be seen as an act of desperation to prolong his term of office as President.  Presidential elections are due to he held by the end of December 2009.

Viktor Yushchenko had unsuccessfully tried to dismiss Ukraine's Parliament in October 2008. Last week his own political faction rejected the President's tactics and agreed to the reformation of Ukraine's Governing Coalition forcing the President to abandon fresh parliamentary elections.

This latest round of reprisals, accusations in what has been dubbed the Battle of the Oranges, follows serious allegations against Ukraine's President being involved in a plot to destabilise Ukraine's economy designed to causing a major loss of confidence and devaluation of the Ukrainian currency (Hryvnia)

Anonymous 1.45 is not well informed. Yulia has proposed to refer the matter to international courts for review. The transactions should be readily tracable. Yulia has also claimed that she has evidence that she will refer to an independent internatonal body for investigation. It is not a case of disproving the facts. She only needs to establish that there is a case to answer, join the dots and connect the President. Its only a matter of political will.