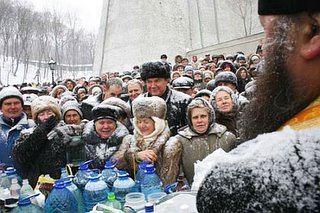 While tough-guy Yuschenko was taking a dip in icy water, [see previous post] his rival Yanukovych attended a water-blessing church service too - but was in contrast, wrapped up in a fur hat and coat.

In a short, amusing article in 'Obkom' its author alludes to Yanuk's criminal past, suggesting that he looks happy because it's easy to 'lift' someone's pocket book in such a crowd, and notes that he hadn't removed his impressive 'shapka' or fur hat, even though near a church.

As an adolescent, Yanuk led a gang that specialized in stealing fur hats and earrings from victims, as well as other crimes, for which he 'served time'. Once when he was Prime Minister speaking from the parliamentary podium, a rival walked up and placed a fur hat on the lecturn to knock him off his stride.. Hecklers have been known to call out: 'Nice hat, Viktor Fyodorovich...'

I wonder how long it will be before an egg is thrown at him in this election campaign..

Let he who is without sin cast the first egg?
Posted by LEvko at 8:00 PM