Today Yushchenko was supposed to attend an hostile Parliamentary session to try and sort out the constitutional crisis. Speaker Lytvyn hinted to journalists that his reception may even turn out to be physical - flying fists and scuffles are not unknown in the Ukrainian Parliament. When asked from what quarter the attacks may emanate, he enigmatically replied: "Just check out the deputies that aren't wearing ties..."

At this time of year Russian and Ukrainian Orthodox Christians have a tradition of celebrating the Twelfth-Night, the Eve of the Epiphany, by swimming in ice-holes symbolizing the baptism of Jesus in the river Jordan.

Rather than attend the show-down in Parliament, Yushchenko, his PM, several ministers and the Mayor of Kyiv boosted their macho image in a different manner. Despite the unseasonably cold weather they all attended a church service, then followed the President for a dip in an icy park lake. 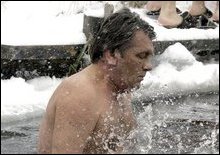 I wonder if there was a cardiac resuscitation unit nearby, just in case. [Source: 'Ohlyadach']

While I'm at it, here's one from my 'funny file'. I can't think up a suitable caption yet.

Scott comments---How about this caption: “…I was all kinked up like this until I took the cure some of the guys from the Central Asia section told me about. You first need to find a camel. Now, not any camel will do. It has to be a pregnant camel…"
Posted by LEvko at 10:27 PM

how about -
"President Putin, inexplicably, went into spasms when a reporter asked for his comments regarding the rumor that the Russian President's office has been under secret survelliance for the past few years, by the Americans."