No loyalty or principles in Ukrainian politics 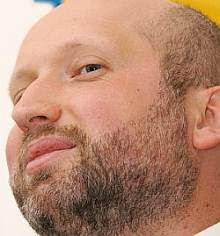 Plyuta had been Yush's long-time loyal bodyguard before and during the OR. A while ago he recalled his adventures during this period in an interview [in English] in which he spoke of the assassination attempts on Yushchenko's life.

Turchynov is Yuliya Tymoshenko's most loyal confidante; he was #2 on the March 2006 BYuT VR election list.

Presidential administration head Viktor Baloha's comment on Turchinov's appointment to NSDC deputy secretary position was: "Oleksandr Turchynov has an intensified sense of detecting danger to the country. This quality will help him in his work in the NSDC."

On 15th September 2005 Turchynov gave a sensational press conference having resigned from his position as head of the SBU [security service of Ukraine] This was during the huge 'bust up' amongst the orange forces which led to Yuliya Tymoshenko being sacked as prime minister by Yushchenko. The orange forces have never fully recovered since.

During the press conference he recounted his attempts to 'sort out' the dreadful corruption in RosUkrEnergo, the secretive monopolistic importer of Russian and Turkmenistan gas.

"I had several discussions with Mr Tretyakov [a closed presidential aide], who, referring to the president, told me that I should immediately stop destabilizing the energy sector, which the SBU was [supposedly] doing...I didn't take this seriously... but after this I had a discussion with president Viktor Andriyevych himself who accused me of persecuting his boys, and that the SBU are working against his team...I received a ban preventing me investigating questions surrounding Naftogaz [further], and told not to push my nose there. But I did not follow the president's order, and the SBU continued to look into these questions. Furthermore all the materials were collected which prove criminality in these schemes."

Perhaps this is what Baloha meant when speaking of detecting danger to the State.

PoR and the Communists have vigorously reacted to Turchynov's appointment, who they perceive as an attack dog. 'Gazeta po Kiyevski' interpret his appointment as 'a last chance for the coalition'.

LEvko thinks that whenever things begin to get really hot, Yush calls upon Yulka [or in this case her right-hand man] to do the 'heavy lifting'.

Ukrainian politics is so unpredictable. Colleagues are betrayed, become bitter enemies, then months later, are back in favour again. Who knows who will 'pal up' with who next. Or who will be dumped.
Posted by LEvko at 12:38 AM

Is Turchynov's acceptance of an appointment by Yusch a betrayal of Timo? Has he also left BYuT?

Nope, Turchynov is still very loyal to Timo and BYuT.

And hopefully this will mean that the opposition will get to work 'opposing' the Coalition govt.

Hi David - Turchynov is v. close to Yulka, so I do not think he would betray her.

Yush is giving a signal to PoR and the ruling coalition - either agree on early elections, or I will set the dogs onto you.

Tymoshenko is giving a press conference later today, so there may be more on this.

Tymoshenko was feeling out of the decision-making loop lately. The Turchynov move may appease her a little. Plyushch, the new sec of radbezu [NSDC] is quite old and probably only an interim figure, in my book. He is not keen at all on Yulka, so I'm not sure how he will get on with Turchynov.

Yanuk has already said, if you go early, then it will be without PoR.