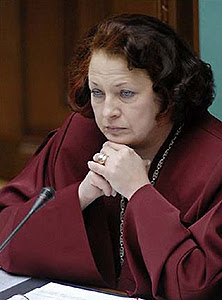 I've translated parts of an instant response to Stanik's sacking, signed by VR coalition leaders Yanuk. Moroz, and Symonenko, and addressed to: 'The Ukrainian nation, PACE [council of Europe], the EU, all international organisations, and ambassadors acredited in Ukraine', from Yanuk's official website:

"Viktor Yushchenko by his anti-constitutional acts is pushing Ukraine along the road to anarchy and chaos...

We are convinced that the president is realizing an anti-constitutional rebellion. The next step of the president could be an ukaz ordering tanks onto the streets..

The actions of the president of Ukraine are becoming dangerous for the state and the nation. Ukraine is threatened by legal disorder and civil war.

We appeal to the Council of Europe with a call to support us in our demand against the return of authoritarianism in Ukraine. We call upon the world to remind president Yushchenko about democratic principles, about the supremacy of law, and that Ukraine should remain a region of peace and stability in the centre of Europe."

Quite melodramatic..Will kompromat against Stanik be now produced?

Have the coalition, in the words of George Bush, misunderestimated Yushchenko?
Posted by LEvko at 7:24 PM

Will they get their apartments back?...

This is elmer (I don't have a Google account).

How ironic for the Yanuki to be appealing to Europe for help, when they have done everything they could to stop Ukraine from joining the EU, and the WTO, for that matter.

How ironic that they are all too happy to sack Yushchenko's ministers, for no good reason, like Tarasiuk and Ohryzko, for example.

But when their own ox is gored, they suddenly find it "unfair."

How ironic that they would find the sacking of a Kuchma-appointed judge to be tantamount to ordering tanks onto the streets.

How ironic that they don't question the $12 million worth of property that Stanik's mother got, for some unknown reason.

How ironic that they don't comment on Stanik's husband's arrogance in responding to a female reporter's questions: "I want to question you about your underwear."

I wonder if Paul Manafort and his American PR firm helped the Yanuki put together their screams for help.

Misundermistated perhaps, the coalition to again quote George II is working hard and doing a good job.
Hopefully they might fare as well as the head of Fima and the best secretary of defense in US history

How to misunderstand the following ---
"“We are come for your good, for all your goods.”"
King George II