Tsushko requests protection from Yu, Ya, and Moroz 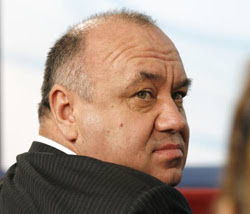 The Minister of Internal Affairs, Vasyl Tsushko, [see photo from Unian] has today written to the President of Ukraine, the Prime Minister, and the VR speaker, warning of preparations by some 'state authority officials', and separate political forces, to discredit of leadership of the MIA.
In the letter, he warns that: "these..will be in the form of accusations of an opaque and corrupt nature, directed at the leading figures [of the MIA]. In particular, publications are being prepared about alleged bribe-taking by the leaders of the organs of the MIA".
"The Ministry of Internal Affairs sees this as a preparation by certain political forces to prevent the MIA from fulfilling its responsibilities - the MIA is probably the only power ministry today which can ensure stability and tranquillity in the state," emphasizes internal affairs minister Tsushko.
In his opinion, "The purpose of the organizers is to destabilize the situation in the country, including by the destruction of the principles of legality of the actions of the organs of internal affairs".
"Today not all political forces are attracted by MIA policy, directed toward the non-admission of provocations or use of force on the streets of Kyiv and in the country, between the supporters of parliamentary coalition and opposition..".
Rather curious...Ukraine's 'top cop' bleating in this way..seems to me that he is another that is being pulled in all directions..or is it the Piskun effect again?
In January Tsushko replaced the chiefs of police in half of Ukraine's oblasts and in Kyiv and Sevastopol with a number of his own 'mean-looking dudes', after discussions with Yanuk, so why the worry?
p.s. the 'over the top' Yanuk-Moroz-Symonenko appeal I mentioned yesterday, can now be read in English on Yanuk's official site here. Save this 'goody two-shoes' trio from the despotic and brutal tyrant Yushchenko!
Posted by LEvko at 2:13 AM

Is the following a "Foreign Notes" mirror site?