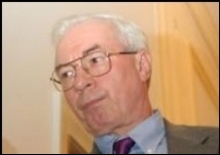 In a radio interview yesterday Yuliya Tymoshenko bitterly ended her dialogue by reminding listeners of a promise made by Yushchenko during the Orange revolution: "I confirm bandits will not rule on our land," he said.

During the interview she commented on two newly-appointed ministers - Yuriy Boiko, about whose activities in Naftohaz Ukrainy I wrote about yesterday, and Deputy PM and Finance Minister, Mykola Azarov [see photo.]

"I can firmly say, that any person would be shocked at the coming to power in the cabinet of ministers in the financial sector, of a person who headed an operation to launder all value-added tax, on fictitious, non existent exports. Only in 2004, when I was PM, we presented documents to the Prosecutor, [on frauds involving sums] of almost 5 Bn hryven, [about $1Bn]. This person is now in charge of the entire financial sector."

When asked if she thought Yushchenko was blackmailed to go with Yanukovych, she replied, "I do not exclude this. Don't think that the political world is so rosy.."

She complained that her deputies were continually offered huge bribes of millions of dollars to switch to the anti-crisis coalition, and mentioned the alleged bribing of Socialist leader Oleksandr Moroz. She claims her bloc presented Yushchenko with evidence of currency transfer, exchange, and withdrawal of cash through Donetsk bank branches to corroborate accusations made by one of her deputies, Oleh Lyashko, that Moroz had been bribed.

Immediately after Yanukovych was voted in as PM on Friday in the VR, events took place, that were in the words of 'Lvivska Hazeta' reminiscent of the 1917 Bolshevik revolution, when the order was: "Seize the banks, telegraph offices, and bridges!"

An attempt to vote in and appoint new faces, mostly from PoR's top echelons, to the National Bank of Ukraine's supervisory council was indecently rushed through, even before the Cabinet of Ministers were ratified. Similar propositions on the appointment of new people to the supervisory council of State Savings Bank of Ukraine, and Ukr-Ex-Im-Bank, were similarly forced to a vote. Luckily all the proposals failed to achieve the necessary number of votes, and fell through.

[This reminds me of the joke, when a crook was asked by a court judge, 'Why do you rob banks?" he replied, "You are so stupid for a judge.. it's because that's where the money is of course."]

Lvivska Hazeta correctly adds that the composition of the new 'coalition of national unity' will not be announced until September, when the VR reconvenes.
Posted by LEvko at 11:32 PM