New man at the NSDC 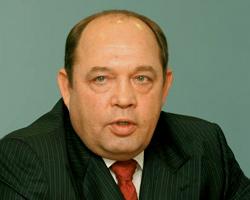 Vitaliy Hayduk, 49, one of the founders of Donetsk-based "Industrial Union of Donbass" Corporation, [ISD] was today appointed secretary of the National Security and Defense Council [NSDC] by President Yushchenko. [IMO the first decent decision he has made for many a month.]

Hayduk's career took off in the mid-'90s, when he was made Deputy Chairman of Donetsk oblast rada. Subsequently he was appointed first deputy of the Donetsk oblast state administration, for a time serving under Victor Yanukovich's chairmanship. From October 1997 until February 2000 Hayduk was President of the closed joint-stock company "Vizavi". From November 2002 to December 2003 he was vice-PM of Ukraine responsible for the PEK [fuel and energy complex].

Together with Sergiy Taruta and Rinat Ahmetov, he created the 'Industrial Union of Donbass'. When Akhmetov lost interest in ISD and switched from gas to metallurgy, it was Hayduk that kept the corporation afloat.

Hayduk is also the President of "Industrial Group" (Kiev) consortium , and chairman of supervisory council of "Dzerzhinskiy Dniprovsk Metallurgical Combine". As energy vice- premier, Hayduk spoke against the creation of a gas transport consortium with the participation of Russia, and was against the reversing the direction of flow of "Odessa- Brody" oil pipeline, favoring rather its extension to Poland. He is considered to be a solidly pro-Ukrainian politician, despite being a 'Donetskyi'.

The union of two structures, those of Rinat Akhmetov and of Vitaliy Hayduk, formed what was loosely called 'the Donetsk clan', but despite this, if there was one person responsible for introducing 'new [more civilized] rules of the game' in the economics of the region, it was Hayduk.

A serious 'politolog' considers Hayduk's appointment, and recent staff reshuffles in the Pres's secretariat, indicate that Yushchenko is undertaking a new political project. Now that PoR have taken a grip on state political initiatives, the President does not have a center of power capable of providing resistance. Neither NSNU, nor the President's secretariat, nor the NSDC can do this effectively. The solution is to create this new center based of the new secretariat of the President, filled with new personnel. The secretariat will compete with the government (incidently, exceeding its legislative and constitutional scope).

Apparently Yushchenko it is 'not contented by political prospects of NSNU' [no surprise there.]

One of the reasons Yush invited Zinchenko to serve as an adviser was to serve as a marker indicating the change. [NU have already protested.]

Unofficial financial support for the project will be provided by ISD. The new project will not only try to recapture support from Tymoshenko's BYuT, which is now supported by most of the 'orange' electorate, but also try to garner support elsewhere amongst the 'non orange' electorate. Yushchenko is hoping that the new personnel will help him regain some popularity amongst the populus.
Posted by LEvko at 11:22 PM