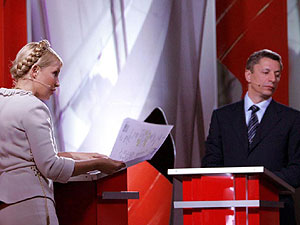 Discussion between Yuliya Tymoshenko and Fuel and Energy minister Yuriy Boyko on a TV prog 'This is what I think', Channel '1+1', 26th Oct 2006

"Yuriy Anatoliyovych [Boyko], tell us please: 'RosUkrEnerho' - is it a private company?"
-"I don't have a clue."
"So you don't know?"
-"No."
"Is it private or state [company]?"
-"To me it makes absolutely no difference whose company it is."
"But you have you fully given up Ukraine to 'RosUkrEnerho'. Do you at least know.."
-"No, for me this is not of principal importance. For me two matters are pricipally important: The contract should be for 55 Billion [cu.m. p.a.] and the price should be $130."

Tymoshenko then produces what she claimed was RUE's company registration document in which the founders submit their start-up funds, as well as minutes of RUE's co-ordination committee, signed by representatives of two companies - 'Tsentrohaz' and the Russian "Erosgaz".

One of the 'Tsentrohaz' signatories was Yuriy Boyko, who was head of the Ukrainian State Gas Company 'Naftohaz Ukrainy' at that time.

"And when you say you don't know what 'RosUkrEnergo' is, I'll tell you - it's a private company, which was created by state official Yuriy Boyko. And in all civilized normal countries, when a person holding an official state position creates a private company for state circulation [of funds], this is known as corruption. I want every person today who receives a new bill for utilities to know, that they are giving their money not to 'Naftohaz Ukrainy', not to 'RosUkrEnerho', and not even to 'Gazprom', but their money is going into the pockets of the highest state officials."

"And when people pay this money I want those people to recall the names of Boyko, Kuchma, Yanukovych and the founders of this [scheme]. And Yekhanurov as the person who perfected the scheme."

RosUkrEnergo is the intermediary monopolist supplier of natural gas to the Ukrainian market.
Posted by LEvko at 9:32 PM

Well done Yulia (and you for posting it). I hope that information doesn't disappear into a black hole. How do they think they can get away with it.