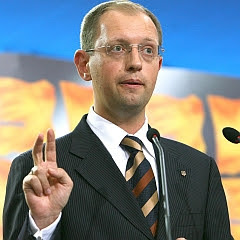 Earlier today, 33 year old Arseniy Yatseniuk was elected new Verkhovna Rada speaker by 227 deputies' votes of the new parliament. The democratic BYuT-NUNS coalition showed admirable discipline with their 100% turn-out in the secret ballot.
A PoR spokesman is quoted as having estimated Yatseniuk's chances of becoming speaker, "One thousand times less that of a meteorite landing on your head."
LEvko thinks that the remarkable solidarity displayed will cause some dismay amongst PoR deputies, but has also averted a possible internal crisis and split in NSNU. Had a couple or more voting deputies not turned up, or 'put their cross in the wrong box', and Yatseniuk's candidature failed to attain the required 226 votes, PoR and those in NSNU favouring a broad coalition would have probably put forward Ivan Plyushch's name for speaker, and maybe even demanded the removal of Viktor Baloha from the president's secretariat.
Whether similar solidarity can be maintained when deputies come to vote for Tymoshenko for PM, remains to be seen.
In March this year, Yatseniuk, a.k.a Kinder-surprise, was elected Ukraine's Foreign minister by 426 deputies, so maybe he will turn out to be a consolidating figure in the VR after all.
He has also served as Minister of Economics in the Yekhanurov government [when he was critical of the previous Tymoshenko government], as deputy chairman of the National Bank of Ukraine, and as deputy head of President Yushchenko's secretariat - so he's a smart cookie indeed.