Yekhanurov has discovered he shares quite a number of values with PR, and sees much in common with them on the development of the Ukrainian economy. About 40% of his ideas coincide with those of the Socialists. And as for BYuT? Well, according to Yekhanurov, they don't have an economic program at all.

Meanwhile Taras Chornovil, Partiya Regioniv front man and their #4, has again declared that PR are ready to co-operate with the NU bloc in any coalition, on the proviso that Yanukovych is PM, and that the ghastly pair of Mykola Azarov and Andriy Klyuyev are vice PM's and ministers of finance and of fuel and energy respectively. What despicable characters they are is documented in Andrew Wilson's excellent "Ukraine's Orange Revolution" [Yale University Press].

The thought that they may wield power again propped up by the 'Our Ukraine' bloc is truly depressing, even for an outside observer like me. 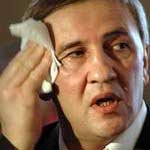 And Yushchenko hints that he is not against new Kyiv mayor, "nutty-as-a-fruitcake" Leonid Chervonetsky, [see photo] who is already sacking people, changing locks, and controlling affairs using newly-introduced security men in the Kyiv city state administration..

An article [in Ukrainian] on pro-BYuT 'Kiyany' website describes was a swamp of nepotism the Kyiv city council has now become, and helps explain why things are turning out as they are..

Maybe there will be something more cheerful tomorrow.
Posted by LEvko at 10:40 PM