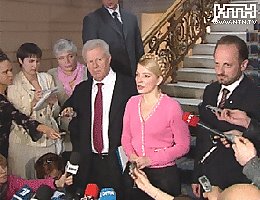 Yuliya Tymoshenko, Oleksandr Moroz, and Roman Bezsmertnyi to-night signed a protocol on the priciples of formation of the coalition of democratic forces in the newly-elected parliament. The terms of the protocol indicate Tymoshenko will be PM.

Maybe I'm a cynic, but I feel like the miserable old drunk at a wedding. "I give it six months.." But can 'Regiony' stick together for that long?
Posted by LEvko at 9:38 PM

I believe the stability and success in making more reforms of the OR coalition this time around will depend on whether Yusch decides he wants to be more of a servant-leader, turning away from his melancholic disengagement from the more unpleasant aspects of governance during this past year....