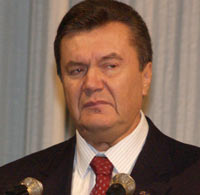 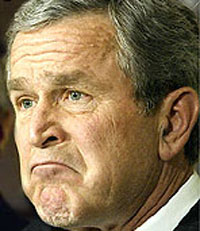 Unian reports that the press service of the US embassy in Kyiv announced US presidential aide and deputy national security advisor Jack D Crouch, during his recent visit to Ukraine, passed on greetings from George W. Bush to President Yushchenko only, and not to Viktor Yanukovych, on PR's decisive victory in the parliamentary elections, as had been declared by the Party of Regions press service.
Rather small-minded, no?

Some observers interpreted the 'greeting' to Yanukovych as possible approbation for a grand coalition.

p.s. First chairman of PR's polit-rada Mykola Azarov states that Yanukovych does not necessarily have to be PM in any NSNU-PR coalition, [see previous blog] and now PR front-man Taras Chornovil, in an interview with Glavred says, "Under certain circumstances Yekhanurov [NSNU #1] could be Prime Minister."

You have to feel a bit sorry for Yanukovych, who for all of his faults, ran an efficient and successful election campaign for PR. He even tried to be nice to Jack D Crouch.

Next time Azarov or Chornovil meet Yanukovich, it may be a good idea if they keep out of arm-swinging range..
[Yanukovych has a reputation of having 'a useful pair of fists'.
Posted by LEvko at 7:52 PM