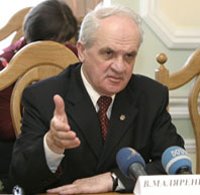 The VR today granted Vasyl Malarenko's request to resign his position as head of the Ukrainian Supreme Court. Addressing parliament, he explained that it was due to personal family circumstances.

This man's recent past strikingly illustrates the abuse of power and stinking corruption that swirls around Ukraine's ruling elites
.
Malyarenko, [see photo] a close confidant of Yanukovych, is implicated in audiotapes in which former President Kuchma and PoR leading light Mykola Azarov are heard conspiring to frame a former bank executive on tax evasion and other charges.

He abused his position, together with Azarov and former Prosecutor-General, and now PoR deputy, Svyatoslav Piskun, in nepotistic insider business dealings .

In his address today he declared that he had strived to be honest and objective all of his life, and so wanted to tell the truth today.

He was given a standing ovation... Sickening..
Posted by LEvko at 1:57 PM