Theatricals in VR, and some speculation

Yuliya T announced in the VR that BYuT will not take part in any further pleniary sittings until 25th July, the day on which the President has the right to dismiss parliament - something BYuT are demanding.

"We have ceased using megaphones and horns [to disrupt proceedings] to enable society to hear the rustle of dollar bills in this parliamentary hall. So that [everyone] can hear, that they [i.e. Socialists and Communists] sold out everything that people voted for," declared Tymoshenko. Then BYuT placed a blue and yellow flag to cover their seats in the VR, and left. 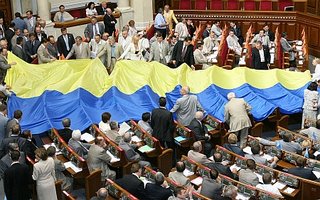 Later today, when Yanukovych was asked after a meeting with Yushchenko, if he was certain the President would submit his candidature for PM to the VR, he replied: "I saw in the eyes of the President a great desire to unite our efforts, and for me, this is sufficient."

It seems then, that Yanukovych shares with President Bush, that special gift of being able to read someone's mind, merely by looking into their eyes.

"I looked the man in the eye. I was able to get a sense of his soul," said Bush profoundly, after a meeting with Vladimir Putin several years ago.

All the speculation at the moment is about whether Yushchenko will submit Yanukovych's candidature to the VR for approval, and Yanukovych becomes PM; or whether he will dismiss the VR on the 25th July, and possibly call fresh elections.

According to a well-researched piece in 'Obozrevatel' though, there is a third possibility. Yushchenko may do neither, and the VR will continue their activities, just as acting PM Yekhanurov is doing, even though it could be said Yekhanurov's employment as PM has been terminated twice already.

One of the few unequivocal statements Yushchenko has made these last few months was, "The VR coalition has to submit its candidature for PM, for consideration [by the President]. I will propose the submission [for approval by the VR] only when the activity of the Constitutional court is renewed." However, there is no knowing at the moment when this will be.

In my opinion, for many months Yushchenko has favored a 'wide' coalition, with Yekhanurov as PM and head of the cabinet of ministers. Some analysts seem to think that Yushchenko will never accept Yanukovych as PM, but apart from Yanukovych and his party, many may be happy with this 'third possibility' arrangement, now that Moroz's fervent aim to be VR speaker has been achieved.

So maybe the man knows how to get what he wants, after all.
Posted by LEvko at 10:31 PM

Yes - it does appear that Yushchenko's expressed prime goal, "to build a nation" , is the only thing that accounts for his surprising behavior including the lack of campaigning, antagonism with Tymo, and now his heavy handed treatment of Yanu.

This is exciting and I urge everyone to stay in their seats and not run for the parking lot.

There are still two minutes left in this game.