Between a rock and a hard place..

Yuliya is trying to make herself more attractive to the business wing of NSNU - promising a business-friendly agenda if she succeeds in forming a ruling coalition with NSNU and the Socialists.

Kirstin Zimmer, a top-class specialist in East Ukrainian affairs, says in a 'Deutsche Welle' interview that Akhmetov's sudden interest in politics is primarily driven by self-interest and obtaining immunity from criminal prosecution, and that PR does not find being in some kind of constructive opposition "to its taste at all."

"Their position is - either in power, or with no-one. [In opposition] they have nothing to say and can only lose," according to Zimmer. She thinks that at the moment there is little chance of Yanukovych leading a future government, but if the Orange blocs cannot overcome their mutual problems and come together, then an 'orange-blue' coalition is possible.

PR financier Rinat Akhmetov, perhaps sensing an opening to do a deal with Yushchenko's NSNU, took the plunge and staged a press conference today. [ 'Kyiv Post' reports the event.]

The main points he made were: he considers Yanukovych has "everything [required] to lead the government" [interpret - has my blessing, even though he's a bozo], and that PR are ready to work with anyone, even BYuT, in order to form a government. [no hard feelings then against Tymoshenko for clawing back Kryvorizhstal, and lightening Akhmetov's load by $700m? - oh yeah?] [from expres.ua ]

He considers the main task of a PR-led government would be to increase economic growth by 8 - 12% p.a. Deep thoughts continued as he went on: "The state is not an effective owner, whereas a private owner is effective."

A RU-led government would hold a referendum on the question of Ukraine joining NATO.

When asked if he intended to work in government or remain a parliamentary deputy only, he replied that he wished to be a deputy only, joking,"I'll chair the Parliamentary Committee for Combatting Organized Crime." [In other circumstances, maybe a witty remark, but for a man whose rise co-incided with with so many unexplained killings..]

He promised that he would certainly learn Ukrainian, and would regularly attend parliament. He pressed all the right buttons about transparent business, and declared that he intends to hold on to all of his business empire [which provides about 10% of Ukraine's GDP] and not sell up. I'm not sure whether all this made him and RU look more attractive to his prospective parliamentary partners.

NSNU and Yuschenko are between a rock and a hard place. By delaying any decision on formation of any coalition until 7th April they are giving a clear signal that NSNU-PR coalition is a possibility. I guess that it must be sinking in, whoever they work with, they will be junior partner, hence the dithering.

The Donbass region, where PR completely dominates at all levels of government, is Ukraine's industrial heartland on which a large portion of Ukraine's economic growth will depend. If PR are not given a 'piece of the action' in parliament, then they will 'scuttle off back to their tent,' and wait until the next elections. One observer puts it thus: 'If NSNU go with BYuT, its nothing but problems. If they go with PR at least some of them will be solved."

p.s. Roman Kupchinsky is quite right in his piece in Kyiv Post Ukraine sometimes does resemble a playground for oligarchs. 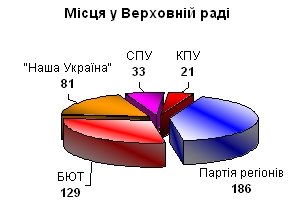 Pie chart from 'Ukrainksa Pravda' shows allocation of seats in the new VR
Posted by LEvko at 10:47 PM