Several days ago I blogged about recent events at the Irpin State Tax Academy during which a sacked and reinstated former rector, Petro Melnyk, together with a bunch of 'associates' forced their way back into the Academy. They were accompanied by several hundred flag-waving PR activists, and some reports said that Melnyk was being protected by 50 private security men.

Melnyk is a local PR big-shot, and well-placed on their VR election list, so has a good chance of getting into the VR after the March 26th elections.

Today NTN TV ran a curious story - "Head bodyguard of ex-rector of Tax Academy found dead." Roman Lotyuk was found dead by his mother last Thursday. Police say that Lotyuk committed suicide by "shooting himself in the head with a rubber bullet." The results of the autopsy report are unknown, but Lotyuk's friends are sceptical about the initial statements. Earlier the State Tax Service had accused the security firm for whom Lotyuk worked of illegal forcible seizure of the Irpin Tax Academy. 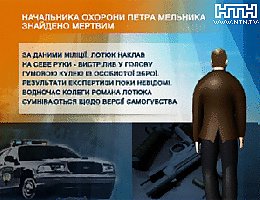 Note: Just over a year ago the boss of the Artyomovsk Champagne factory, who was a leading Donetsk businessman and regional government deputy, also accidentally shot himself with rubber bullets from his own gun.

And as everyone knows, there has been several other high profile 'suicides' since the Orange Revolution too.
Posted by LEvko at 2:05 AM