Party of Regions head Viktor Yanukovych has stated that he agrees with the President that the parliamentary elections took place in a democratic and transparent manner. Both said there had been some organizational shortcomings which prevented some citizens from voting', but, that "after the final results are announced discussions should start on how to create a parliamentary coalition."

PR's campaign chief Boris Kolesnikov added some detail and announced that their conditions for entering any coalition are: [1] Russian language to be officially approved as being Ukraine's second State language; [2] Rejection of Ukraine's entry into NATO.

Foreign Minister Borys Tarasiuk says in order for talks to take place between his Nasha Ukraina bloc [1] PR must reject any ideas about federalization of Ukraine, [2] reject the notion of Russian being provided the status of Ukrainian state language, and [3] accept a Euro-integrational path for Ukraine. So, quite a chasm to bridge between PR and NU, but I suspect, not unbridgeable if some compromise can be made on the language issue and on NATO.

Possible 'king-maker' Socialist leader Oleksandr Moroz has clarified his position too. He is 'for an orange government, but PR must be represented in its structure.' He suggests that in the 4 or 5 oblasts where PR dominate, governors [who have significant power and are nominated by the President] should be of a blue and white hue.

Yulia want to be 'queen bee' and have nothing to do with 'bandits.'

With 95% of votes counted its still not clear whether the radically pro-Russian and and virulently anti-west Nataliya Vitrenko bloc will clear the 3% shut-out level. The 13+ votes which would be added to RU's in the event that she should succeed may be very significant in any final tally. Fingers crossed that this Stalinist relic is finally out of Ukrainian politics. 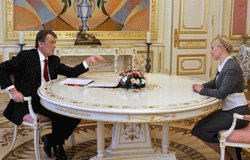 When Yuliya met Yush yesterday they sat on opposite sides of a grand round table. Please note: Yush is well out of 'handbagging' range. Its not clear whether Yuliya had her 'Rosa Kleb' designer shoes containing spring-loaded daggers in the toe-caps, but I guess Yush wasn't taking any chances...

Update: The Nasha Ukraina bloc true to form has stuck its head up its **** for the next two weeks. Its website announces that the NU party presidium will consider the question of creating a parliamentary coalition at a meeting on 7th April. [No leadership..or maybe Putin had a word..]

'Any possibility of joining a bloc with PR has been rejected at a Socialist Party council', said Yosyp Vinskyi in a BBC interview today. He considers Yanukovych 'Kuchma Mark 3'
[who is Mark 2?] It seems BYuT and the Socialists want to close the deal promptly. The electorate probably want this too. With 97% of votes counted its looking like about a 40 seat majority for oranges if a coalition is formed. Why is Yuschenko holding back?
Is it something to do with shady deals I mentioned yesterday?

Evening update: With 99% of the ballots counted, [by my wobbly math] I think there would be about a 36 seat majority for an orange coalition.
Posted by LEvko at 12:59 PM