'Businessization' of politics - a post-Soviet disease 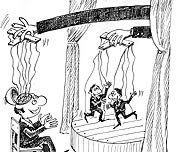 Tymoshenko repeats ad nauseam that BYuT will not work in one bloc with PR under any circumstances, and has challenged Yushchenko to declare this too, no doubt knowing he will make no such a statement, Yushchenko sensibly sticking to to old politician's maxim 'never say never.'

NSNU campaign chief Bezsmertnyi asserts that the only alternative to an orange coalition is the dismissal of parliament by the President, and reveals an orange coalition will be created as soon as polling stations close on polling day next Sunday; whilst Zvarych mumbles an NSNU-RU coalition is not possible due to ideological and political differences.

As for Yanukovych, during a visit to the Aviant aircraft factory in Kyiv today, when asked about the possibility of forming a coalition, he struck a statesmanlike pose and sensibly replied, "We have not and will not conduct discussions on principle, because we decided [to discuss this] only after the elections, once we see how many seats everyone has got in parliament." His statement may be interpreted he considers an outright PR victory unlikely, so his later threat of a blue and white maidan in the event of falsification is rather implausible as everyone knows this VR election, unlike the 2004 Presidential election, is not a winner-take-all scenario. The result will be a muddle - not clear-cut; and anyhow Kyiv is predominantly pro-orange.

Elections are supposed to be about parties' leaders providing electorates with their vision for the future, about aspirations and plans of action if elected. But to me these Ukrainian Parliamentary elections somehow have sham feeling about them. There has been too much talk of coalitions, behind the scenes deals, and of businessmen and commercial client candidates paying millions of dollars for places on election lists of all of the main parties...and so many candidates with very dubious previous histories on the lists, particularly PR's list.

Just a couple of examples how the elections may be more about inside deals and business than politics: there has been speculation that veteran Socialist leader Oleksandr Moroz was keen to see his daughter in the VR, but to avoid the accusation of nepotism, he proposed BYuT give her a good place on their election list, and in return the Socialists would place on their list West Ukrainian magnate Petro Dyminskyi, a close associate of Tymoshenko who is disliked by many of her close associates. [In the end the deal did not go through].

There's speculation that Tymoshenko would be prepared to accept the position of Parliamentary speaker in the event of a NSNU - BYuT coalition, if she were allowed to become gas princess again in total command of gas importation.

Similarly, conditions on how [and to whom] the important state Ukrtelekom enterprise is to be privatized have featured heavily in NSNU - RU coalition discussions.

One observer calls it the 'businessization' of politics - a post-soviet disease of Ukraine's political elite.
Posted by LEvko at 11:01 PM

Business has always had a significant interest in the state as the state, by virtue of its official monopoly on the use of legit violence is key to the formation and reformation of property rights.

I think it's more an issue of degrees of separation, as oligarchy needs to be tempered by some democracy to make the rules more fair...